Compounding Pharmacies and CGMP: A Primer

In the minds of many pharmacists, current good manufacturing practices (CGMP) have unduly raised the bar of compliance under the jurisdiction and authority of state boards of pharmacies (SBOP).

But compared to the potential financial and safety-related consequences of noncompliance, properly implemented CGMP should not be seen as a regulatory burden, but a reliable safeguard against potentially disastrous outcomes—a point made clear in 2012 when improper compounding at the New England Compounding Pharmacy sparked an outbreak of fungal meningitis which resulted in 64 deaths, 751 injuries, and 25 counts of second-degree murder.

As of November 2017, no studies have been published that provide financial data on the impact of drug compounding pharmacies’ compliance to CGMP or its significance to protecting the health of the public.

But as we approach the four-year anniversary of the Drug Quality and Security Act (DQSA, 2013), U.S. Food and Drug Administration (FDA) 2016-2017 inspection and regulatory data (shown in the graphs below) and State Board of Pharmacy (SBOP) data provided in the most recent annual Government Accounting Office (GAO) report provides compelling evidence that, for the most part, compounding pharmacies are not realizing the importance CGMPs have on sustaining compounded medicines as a viable resource to patients. 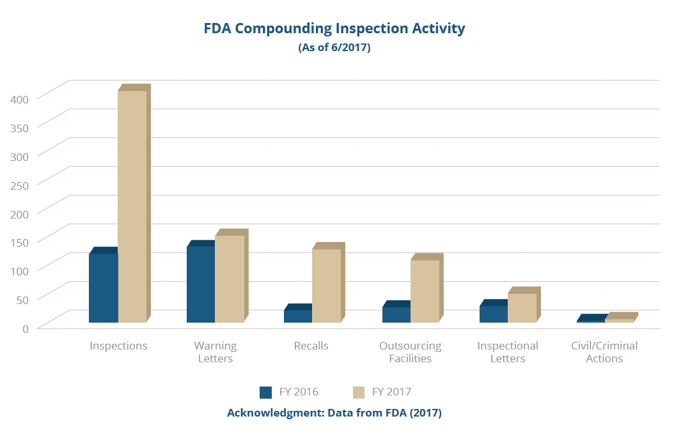 "This is a critical time to elevate the necessity of CGMP compliance as a means of motivating compounding pharmacies to take steps toward implementing the practices FDA requires of them to meet both the health and economic needs of an already burdened healthcare system.”

While much work still needs to be done to eliminate the risk of exposing the public to poorly compounded drugs, education offers the best mechanism for beginning to change risky behavior among compounding pharmacists. With the right knowledge about what the FDA and the public require from quality compounded drug products, the FDA’s mission can be realized in such a way that works to everyone’s benefit.

Along these lines, compounding pharmacists should consider the following three questions in order to understand the risks of failing to adopt GCMPs throughout their organization:

Rather than contending whether or not regulators are misapplying the rules, and if the FDA, in the words of congress is “overstepping” their regulatory authority, educating and implementing appropriate strategies that enhance patient safety while making economic sense best serves the compounding pharmacies in the long run.

The Law and Compounding Pharmacies

While the public’s attention has fixated on the debate taking place between the president and the incumbents in congress regarding repealing and replacing the Affordable Care Act (ACA), another debate has been brewing quietly in the background—this one between compounding pharmacists and the FDA.

Since then, some statutory practices that have evolved over the last twenty-five years following another significant event in the evolution of the modern US drug regulatory law are being questioned when applied to drug compounding.

These concerns have been further accelerated by an FDA now more proactive in its initiative to bring its operations into the twenty-first century.

Today, CGMP regulations are the cornerstone of the Food, Drug and Cosmetic Act (FD&C) (“The Act”). CGMP provides a mechanism for drug manufacturers to produce pure, safe, and effective drug products and for the FDA to inspect; issue observations, warnings, injunctions, and consent decrees to drug manufacturers who fail to comply with the CGMP rules found in Title 21 of the United States Code of Federal Regulations (CFR) Part 210, 211, and other applicable sections.

Since DQSA was passed, The Act has now been extended to drugs for human and veterinary compounding.

Through legal mechanisms that have evolved between the FDA and Department of Justice (DOJ) since the FD&C Act was passed in 1938, the FDA can and will continue, in the words of the Commissioner, “to actively oversee drug compounders and, when appropriate, initiate regulatory action as it fulfills the FDA public health mission on behalf of patients.”

FDA’s list of recent inspections, recalls, and other enforcement actions clearly show that regulators not only intend to make good on this initiative but are actively doing so right now.

With roughly ninety percent of pharmacies not yet registered as an outsourcing facility, it is certain that the FDA will continue to leverage their enforcement of CGMP on compounding pharmacies to protect the public from poorly compounded drugs.

Grab Our Guide and Dive Deeper

Learn how to assess the applicability of CGMP to your compounding pharmacy and how to take the first steps toward implementation in our free white paper, The Importance of CGMP to the Safety of Compounded Drugs. 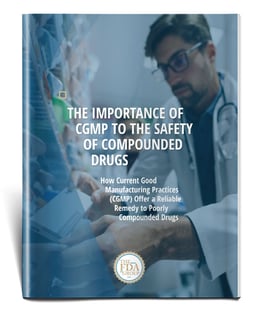 The Importance of CGMP to the Safety of Compounded Drugs