The FDA, after nearly four years of reworking its Quality System Regulation (QSR)—21 CFR, Part 820—finally published a draft regulation on February 22, 2022, that harmonizes the QSR with ISO 13485:2016. Read it here.

With this proposed rule, the agency has officially announced its plans to change the QSR to enable broader worldwide harmonization of medical device quality management systems. The resulting regulation would be called the Quality Management System Regulation (QMSR).

The agency is also using this opportunity to update other areas of its regulations to better accord with the Federal Food, Drug, and Cosmetic Act, as well as to clarify GMP standards for combination products.

Here, we distill some of the most significant components of the proposed rule with the caveat that everything and anything is subject to change.

Some Quick Background on QSR and ISO 13485 Harmonization

One of the primary differences between the current Part 820 and ISO 13485 is the international standard’s “greater emphasis on risk management activities and risk-based decision making.”

From FDA's perspective, risk management is an “essential systematic practice” to ensure that devices are safe and effective. If the proposed rule is finalized, manufacturers will likely need to enhance risk management procedures in all aspects of their businesses to align with the QMSR.

FDA is proposing to change the term “management with executive responsibility” from the QSR to  “top management,” which is established in ISO 13485.

However, under this proposed QMSR, “top management” would keep the current QSR definition of “management with executive responsibility.”

From the draft rule:

"This will maintain the principle and requirement that the most senior employees of a manufacturer are responsible for establishing and making changes to the quality policy and ensuring the manufacturer follows the policy,”

“FDA expects medical device manufacturers, led by top management, to embrace a culture of quality as a key component in ensuring safe and effective medical devices.”

Firms interested in the work being done here may want to familiarize themselves with—and potentially participate in—the Case for Quality Collaborative Community (CfQcc).

#5 — "Customer" has been introduced and formally defined

The proposed QMSR defines a “customer” as:

“persons or organizations, including users, that could or do receive a product or a service that is intended for or required by this person or organization. A customer can be internal or external to the organization.”

The draft further says a customer “can encompass many types of individuals and organizations throughout the device manufacturing process,” including contract manufacturers and makers of components.

The QMS also would have to be documented (e.g., by recording quantitative data so manufacturers could analyze the performance of their processes and protocols).

If this proposal is adopted, FDA states it intends to replace its long-standing Quality System Inspection Technique, or QSIT.

QSIT would be replaced by an inspection approach that complies with the proposed Part 820  requirements. The agency describes a methodology that is comparable to QSIT (one that would involve information collection to support inspection observations, including Form FDA 483).

While the new inspection approach is yet unknown, FDA has stated that if the proposal is implemented, it will engage in training and teaching programs.

The agency proposes conforming amendments to the cGMP rules that apply to combination products and give manufacturers a simpler way to show cGMP compliance.

Importantly, the proposed revisions have no effect on the combination product's cGMP requirements. Instead, the agency proposes amending the clauses in 21 CFR Part 4 to match the ISO 13485 references.

The proposed rule states it's giving this timeline to give manufacturers enough time to come into compliance. Contact us to get the expert compliance assistance you need.

Where there are differences, FDA provides a reference to the subpart where those differences are addressed. For instance, the differences between the current part 820 subpart K – Labeling and Packaging Control and ISO 13485:2016 Chapter 7. Product Realization is detailed in part 820.45 of the proposed rule.

We’ve reproduced this table below, with these differences highlighted and their references spelled out in the subsequent section. Use the links provided to jump to the relevant sections for details on differences.

The following text is copied from the proposed rule, but has been reformatted and bolded for clarity and emphasis.

The following text is copied from the proposed rule, but has been reformatted and bolded for clarity and emphasis.

FDA outlines differences in the terms and definitions used in part 820 and ISO 13485 and explains its decision to retain or revise certain definitions. See the chart below for many of the significant takeaways, but don't assume this is an exhaustive summary.

Key Considerations and Next Steps for Manufacturers

The QMSR, in its currently proposed form, introduces a new framework for the medical device QSR, which the industry has been waiting for. If finalized without an extension to its current compliance timeline, there won't be much time to comply before the effective date. Certain suggested modifications, as summarized here, are likely to have a substantial impact for many firms.

Stakeholders should study the relevant revisions and consider engaging throughout the rulemaking process to enhance it. As noted, FDA is accepting both electronic and written comments to the proposed rule (Docket No. FDA-2021-N-0507), which are due by May 24, 2022.

We help thousands of life science companies access that top talent they need to navigate and manage regulatory initiatives like these through three convenient engagement models: consulting projects, staff augmentation, and FTE recruitment. 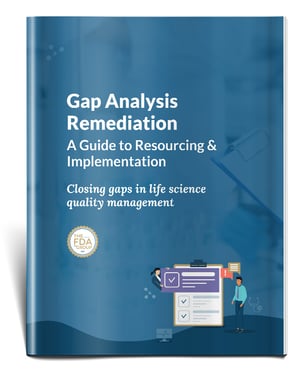 Get an expert strategy for planning the resources you need to make remediation successful. Learn where life science quality departments get stuck, the signals of resource-heavy work, models for implementation, and more.